A friend sent me this article about the Hulme supercar which, like many supercar projects, has run out of investment prior to launch.

There’s a lot to be said about the pitfalls of designing and manufacturing supercars:

Very few low-volume car businesses survive. Even the names you know have struggled – Aston Martin commenced business in 1913 but apparently made its first profit under Ford ownership in the 1990s. That’s some cliff.

The cautionary tale I want to tell today, however, is of escalating commitment.

In her extraordinary talk on negotiation practice and pitfalls, ‘Winners don’t take all’, Margaret Neale tells us that we escalate our commitment when focus on our sunk costs – the costs that are by definition unrecoverable – instead of our opportunity cost, the value of the alternatives that we do not follow. As a result we send good money, good resources and good opportunities down the drain. Margaret’s strong advice is “Ignore sunk costs. Pay attention to opportunity costs.”

The Hulme supercar story reeks of escalating commitment – as Jack Freemantle says in the interview: “I’ve got guys that when we first talked about it, came up and gave me their life savings. We got 300 grand in a month. Those guys need to be looked after. You can quit on yourself, but you can’t quit on other people.”

Jack’s commitment to his investors is laudable and I can relate to his position more than most, having personally lost money launching a European sports car in New Zealand. The question that he needs to ask himself, however, is whether the best way to make money for himself and his investors is to seek even more investment in this project (which in my and clearly others’ opinion has a low chance of success), or to seek an alternate and more favourable opportunity.

Times are tough for many businesses and will likely get worse. If you needed proof, however, that adding value to customers generates profit in any economic climate, consider Apple’s earnings for Q4 08 – Apple sold 6.8 million iPhones last quarter, has USD25B in the bank and zero debt.

It’s easy to blame the economic climate, recalcitrant customers or the phases of the moon for poor profitability. What’s hard is to accept responsibility for poor results and to start creating real value for your prospective customers.

If customers purchase your products through a tender process, they’re giving you a stern warning – you sell a commodity.

Commodities are good products. Jim Collins taught us, however, that ‘good is the enemy of great’. Make something great and customers won’t waste time and money shopping around, they’ll come straight to you and buy.

The employed labor market is about potential, based on prior success. A low risk form of potential, if you like. But in the self-reliant, self-starting, self-employed world, no one’s interested in what you could do if you actually did it. They’re interested in what you’re already doing or have already done. It’s an easy lesson to understand but a hard one to learn / unlearn.

Kudos to Seth Godin and his blog musings for helping me to understand this.

There is no upside to setting a poor customer expectation, even one that lasts only a few seconds. Don’t do it.

Here’s a simple idea that I appreciate every week – shopping trolley wheels that are self-arresting on an inclined moving walkway:

Here’s how they work – on normal flooring, the metal wheels roll normally. On the moving walkway, however, the metal wheels fall into the tread, resting the trolley on its rubber stops and allowing me to let go of my heavy shopping trolley. It’s effortless, automatic and the arresting function has no moving parts.

It’s so simple it’s obvious. Anyone could have thought of it, right? Wrong. As a sober reminder, here’s moving walkway travesty from Melbourne domestic airport: 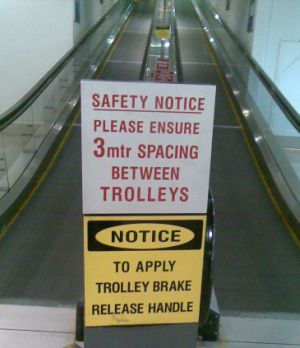 As you enter the walkway you see this sign, telling you to release your handle. Then a smaller warning sign with the same info. Then an emergency stop button to arrest both walkways if needed. When you reach the other end, there’s yet another sign & emergency stop. Finally – just moments from disaster – you hear a looped recording telling you to now ignore all the signs and depress the handle before exiting the walkway. I can see it now – crowds piled up at both ends of the walkway for failing to release and depress their handles at the critical moment.

Why? They fixed the wrong problem. They satisficed on their trolley design, burdening users with the responsibility of protecting life and limb by performing a counter-intuitive task. They didn’t push through the complexity to find the simple solution.

Never underestimate the value of elegant ideas, nor those who generate them.

A friend who works at Sophos sent me this 2 minute?video, of Sophos WebAlert explained with children’s toys:

How do you pitch a product that’s buried on a web server and noticed only when it fails? By creating a campaign that’s different+good – being different gets you attention, being good sells your product.

IMO this campaign largely fails by being only kinda different and kinda good – apart from taking 2 minutes to say 1 minutes’ worth of info, it adds nothing but Sophos knowledge to the viewer. That’s what we call an advertisement – just another interruption. Instead, Sophos needed to understand their audience to create something they want to see, and then fully commit to delivering it.

Here’s two videos that demonstrate this well. Firstly, here’s a Virgin America safety video that 200,000 people have voluntarily watched on YouTube, when they’re nowhere near a plane. Its designers clearly understand travelers, creating appropriate humor to capture their interest:

Secondly, here’s a video demonstrating the benefits of committing fully to pretty much anything, with almost 8 million views to date:

Or, as Jessica Hagy puts it: 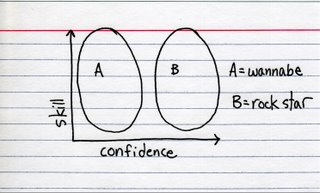 Having said all that, being kinda different + kinda good is better than not being different or good at all – I am, after all, one person bothering to blog about Sophos’ video. So take risks, try, fail & learn – in world full of noise, the biggest risk of all is to play it safe.

Today Seth points us to senseless precision that muddies the distinction between what’s important and what’s not. Don Norman points out overstating precision can also be lethal in his lecture on the perils of intelligent devices. The entire 90 minute lecture is fascinating, but his comments on precision start at 33 minutes:

Really? Are prospective Telefunken factory workers screened against their childhood attitudes toward perfection?

Marty Neumeier, author of Zag, describes?a tagline as the outward expression of your brand’s most compelling differentiator. Surely it would help for your tagline to be believable.

Yesterday a friend told me of a life-changing experience as a 12 year old kid. He was playing rugby and defending the try line as a very large player bore down on him, intent on scoring a try. For the uninitiated to rugby, the effects of big rugby hits look like this:

Deciding that a) his very large opponent was likely to score a try anyway and b) a trip to the hospital or morgue was likely, my friend stepped aside. At that moment a smaller teammate stepped up and comprehensively took this very large player out, preventing the try and saving the day.

In turn he told me his story so that I’d realize I was the last line of defense for one aspect of a client’s business. It stuck in my head and changed my mind.

Chip Heath and Dan Heath tell us about idea that are made to stick – they say that memorable ideas are:

These map to ‘SUCCESs’ for easy recall.

If my friend had merely told me some facts I might not have paid close attention or responded. Instead he changed my mind with a SUCCESsful story that I may never forget.