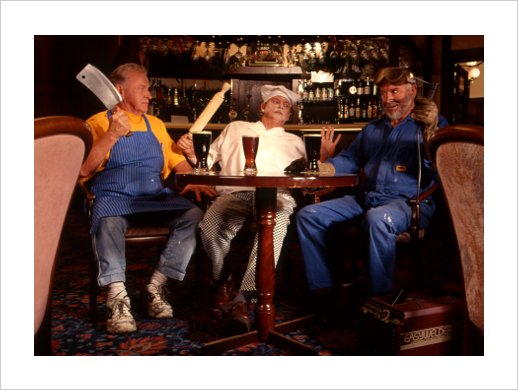 In my first year of as a commercial photographer, I wanted to make a dedicated image to put on my client christmas cards, something that spoke to creativity and technical proficiency. Somehow I came up with ‘Rub a dub dub, three men in a pub’ and convinced a pub and five people to help me make it. The butcher really was the local butcher, the baker is my uncle and the suitably mad candlestick maker a friend from church. Makeup was done by a student artist and another friend helped me move all the gear.

The only natural light in the scene is the light globe at the very top right. The foreground was lit with three studio strobes, including a (then) brand new type of light reflector that provided a large, directional light source to simulate sunlight (through the windows of the bar). The background (the bottles in the bar) were lit with a typical camera flash unit on a slave trigger and a sparkler was lit to create a welding spark.

I still don’t know what I think of this image – as I made it completely from scratch it’s one of the images I feel most naked showing to other people. It took a long time to make and used more of the models’ time than I had hoped, particularly the butcher who needed to get back to his shop (and he couldn’t even drink his beer because I’d put salt in it to keep its head). Plus there are a number of technical flaws that I won’t point out but personally can’t ignore. Fortunately, however, my clients loved it.